The History of the Locket

The locket is traditionally described as "a small ornamental case, typically made of gold or silver, worn round a person's neck on a chain and used to hold things of sentimental value, such as a photograph”. The appeal of the locket is that it allows the wearer to keep a loved one close to their hearts at all times, either by containing miniature photographs, a lock of hair, or even a little love letter.

The Ancient Origins of the Locket

The desire to hold a keepsake or remembrance of a loved one dates back to the earliest days of civilisation. In the Biblical Song of Solomon, written over 3,000 years ago, the writer desires to have his seal worn as a keepsake around his lover's neck.

"Hang my locket around your neck, wear my ring on your finger"

In Ancient Egypt, 2000 years ago, it is said that Cleopatra gifted lockets carved with her image to her favourite courtiers.

Lockets in the Elizabethan Age

Europeans adopted the locket as a popular style of jewellery in the 16th Century, during which time they were worn by both men and women. Lockets containing a portrait of the monarch were particularly fashionable.

One of the earliest known examples of a locket with a picture in it is Queen Elizabeth I’s locket ring. Elizabeth I had the ring commissioned for her around 1575. The ring was made from a band of mother of pearl and gold and was set with diamonds and rubies. When Queen Elizabeth I died, the ring was taken from her finger. Upon examining it, her courtiers found that the ring contained a secret compartment and inside was a portrait of Queen Elizabeth herself and her mother Anne Boleyn. 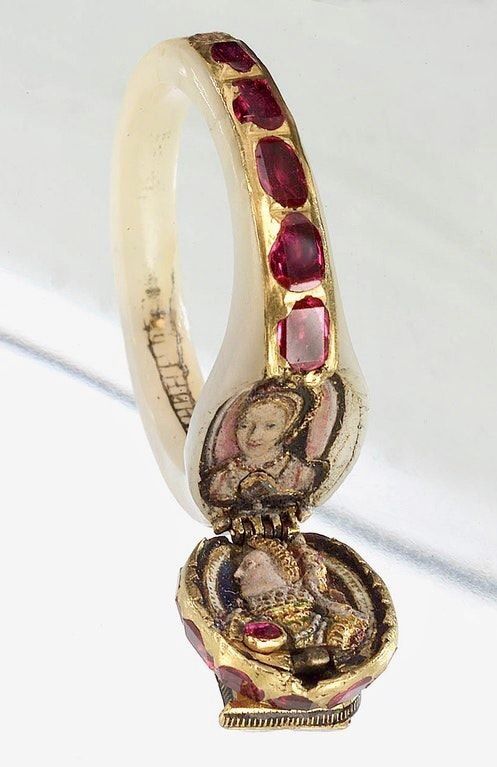 Elizabeth also gave lavish, jewel encrusted lockets to many of her favorite and loyal subjects, including the English Sea Captain, Sir Francis Drake.

By the 17th Century, lockets and charms were used to express a personal or  collective identity or a political allegiance. One of the most tumultuous periods of English history took place between 1642 and 1651, resulting in the execution of King Charles I. Outwardly displaying loyalty to the crown could result in persecution; wearing a locket was a way in which people could show secret allegiance to the monarchy. Following the execution of the King in 1649, loyal followers wore miniature portraits of Charles set in rings and lockets. These lockets were worn secretly and often contained locks of his hair.

By the 18th century, the lock of hair became a principle and visible part of locket  jewellery, often curled or plaited inside the locket for everyone to admire. Often the lockets were transparent, with polished glass or crystal fronts so that the lock of hair could be seen when worn.

In the 19th century, Queen Victoria was gifted a locket bracelet by her husband Prince Albert. Eight lockets hung from the bracelet, and each locket contained a lock of hair from each of their children.  After Prince Albert's death, Queen Victoria wore a locket containing his portrait for the rest of her life. Queen Victoria's sentimental jewellery heavily influenced fashions of the time, and there was a boom in the popularity of locket jewellery in the Victorian era. Lockets were particularly popular as mourning jewellery, as a way to commemorate a lost loved one.

Booming Popularity in the 20th Century

Early lockets were lavish jewel encrusted designs, which only the privileged and wealthy could afford. The aristocracy could afford to commission leading artists to hand paint miniature portraits to place inside their lockets.
By the late 19th and early 20th Century lockets became much more affordable to the middle classes thanks to the introduction of photography and the Industrial Revolution's effect on jewellery manufacture. Jewellery became more affordable and photography created an easy way to add an image to the interior of a locket.

Amid the first World War, young soldiers were able to present their loved ones with a locket containing a photo of themselves; a reminder of their love during their absence. During this period there was such a demand for lockets, that they were produced in vast quantities and sold for only a few shillings.

Today, lockets are still as popular as ever and are worn to remember a loved one, or to keep a memento of a partner or children close to your heart. A locket containing pictures of the couple makes a wonderful wedding gift from the bridegroom to the bride. Lockets are also popular as Christening gifts or as milestone 18th and 21st birthday gifts. Lockets are classic and sentimental pieces of jewellery, outwith the vagaries of trends and fashion. Sizes and patterns may vary but all lockets make beautiful gifts, treasured by the wearer for a lifetime.